”Onigiri おにぎり” is a simple yet delicious Japanese staple loved by everyone from children to adults. It is a perfect treat for a quick bite between meals, a part of bento lunch, and even a late night snack. It has become a popular meal worldwide with a wide variety of types and fillings available.

In this article, you will find out how onigiri actually is and the most popular fillings in Japan.

”Onigiri おにぎり”, also called ”Omusubi おむすび” in some regions, is Japanese rice balls made from Japonica short grain rice with a filling inside. It is seasoned with salt and often wrapped with dried seaweed ”Nori のり”.

Onigiri is a great to-go meal for lunch or a picnic because of its portable nature, which you can easily pick up and eat with your hands. Nori plays a great role as a wrapper to keep the rice together and avoid getting sticky fingers.

Onigiri has a long history, which goes back to the Yayoi period (300BCE – 250CE), when people grilled glutinous rice in triangular shapes. Tonjiki, wrapped and steamed glutinous rice which appeared in the Heian period (794 – 1185CE), is said to be the origin of onigiri. Since then, Those rice balls have been made as provisions for soldiers and portable meals for travelers. The current style of onigiri with Nori wrappers were invented and became popular during the mid-Edo period (around the 17th century).

”O” and ”Nigiri”,  these words refer to the shape of onigiri and the way of making it. The word ”Nigiri にぎり”comes from a Japanese verb ”Nigiru にぎる” which means ”to grip”, and the ”O お” is an honorific prefix.

Onigiri comes in many shapes and sizes. Typically they form triangular, ball, and cylinder shapes. Out of these three, the triangle is the most common shape. Making onigiri can be done by hand, but using easy-to-use onigiri molds with a variety of shapes, such as flowers and animals, brings fun too.

Recently a new way of making onigiri has been popular due to its ease of preparation and attractive appearance. It is no hard-pressing onigiri called ”Onigirazu おにぎらず”. This new style of onigiri is shaped into a flat rectangle, almost like a sandwich. 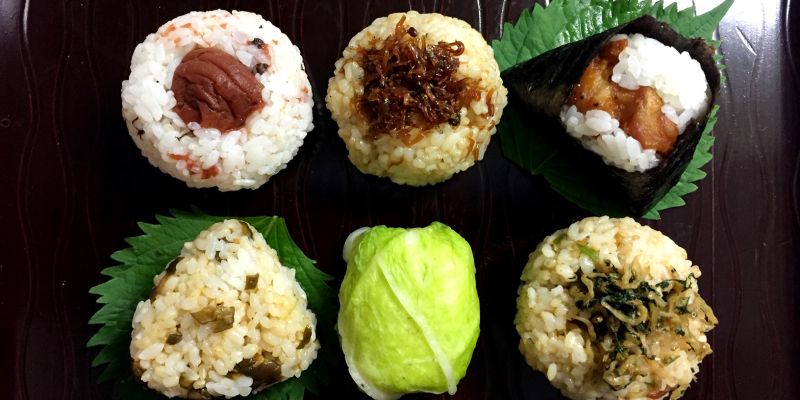 When it comes to choosing onigiri fillings,there’s a wide variety of options available. Actually, You can stuff your onigiri with anything including vegetables, fish, or meat.

Also, onigiri wrappers are of great variety too, from Nori used as a common wrapper, to vegetable greens such as shiso leaves shown above. They impart flavour and make rice balls more visually attractive.

Now I’m going to guide you some popular traditional fillings loved in Japan. 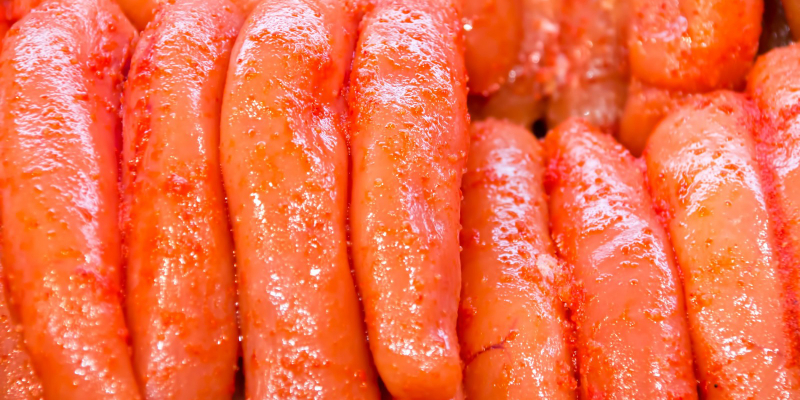 There are a wide range of fish roe used for onigiri fillings in Japan. ”Tarako たらこ” is cod roe used raw in onigiri, and ”Mentaiko めんたいこ” is the spicy version of Tarako. They are pickled in salt, and Mentaiko is seasoned with chili peppers. They are also grilled or mixed with mayonnaise.

Tarako is the best onigiri filling for me. If you are a fan of seafood, just throw away your preconceptions and try it out. The savory flavour amazingly matches the rice and seaweed, like it does pasta.

”Umeboshi 梅干し” is another classic onigiri filling. It is Japanese plums salted and pickled together with red shiso leaves to make a very salty and sour taste.

The history of this combination goes back to the 14th century when the rice balls were served as provisions. Umeboshi is a great ingredient as a preservative to keep the dish good for long.

I admit this filling is not everybody’s cup of tea because of its punchy flavour, but it is an essential Japanese food experience that you should have. A whole pickled plum at the center of onigiri would look amazing and stimulate your appetite once you try the taste. 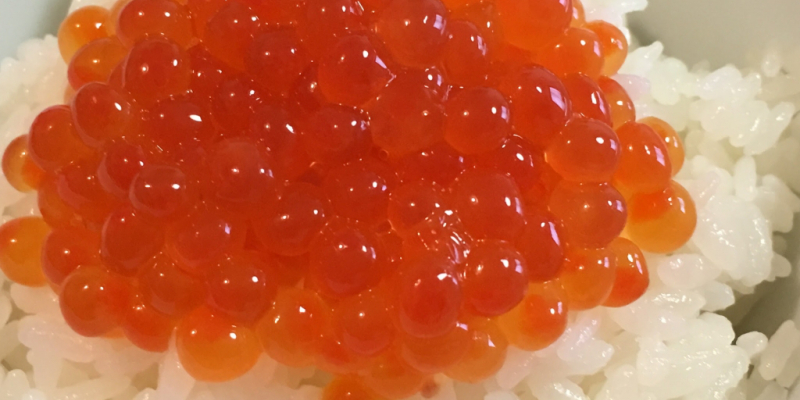 ”Ikura いくら” is another type of fish roe often served in Japanese cuisine. It is glistening orbs of salmon roe pickled in soy sauce. You would be addicted with the popping texture and jewelry-like appearance. 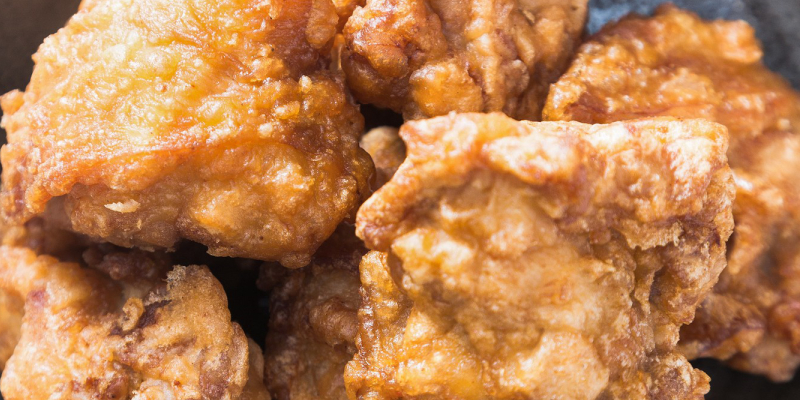 If you want a more western-style of filling, look for onigiri with chicken. Japanese fried chicken known as ”Karaage から揚げ”, which has been a famous dish around the world, can be a delicious filling inside onigiri. This often comes with Japanese mayonnaise. 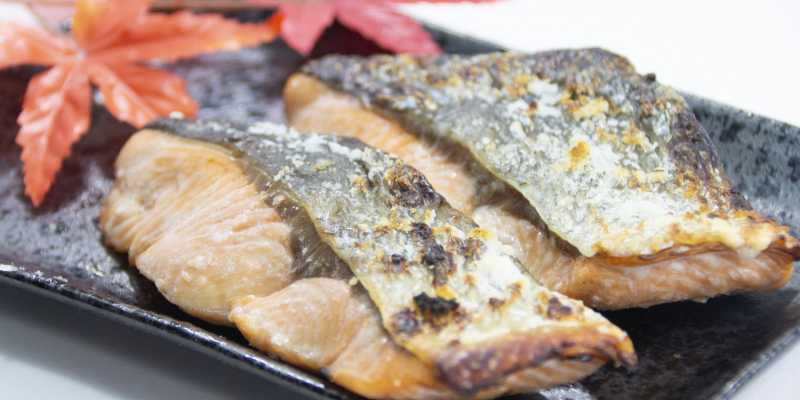 Salmon is one of the most popular onigiri fillings in Japan. It is called ”Sake さけ” (or Shake シャケ), which is the same spelling as Japanese rice wine ”Sake 酒”.

Salmon onigiri comes in a large number of variations. They are grilled, flaked, and mixed with Japanese mayonnaise. It perfectly complements steamed rice and Nori.

Although this is not a traditional filling, tuna with Japanese mayonnaise called ”Tuna Mayo ツナマヨ” is now one of the most popular onigiri fillings in Japan.

”Okaka おかか” is one of the simplest and most old-fashioned onigiri fillings in Japan. It is a mixture of smoked shredded bonito with soy sauce. It is packed with umami, and adds savory smoky flavor as a seasoning to rice.

”Konbu こんぶ” is a type of dried kelp familiar in Japan. It is cooked with soy sauce, sweet rice wine, sugar, and sake until tender and caramelized.

There are a number of ingredients options available to vegetarians when it comes to choosing onigiri fillings. They include vegetable leaves, seaweed, mushrooms, and so on. A wide variety of colorful vegetables can be for a highly appetizing treat.

”Yaki-onigiri 焼きおにぎり” is a type of rice balls grilled with soy sauce glaze until the outside becomes crispy. The sauce varies from simple miso to butter or sesame oil. The enhanced savory flavor and crispy texture will definitely addict you.

Some types of onigiri are not wrapped by Nori but coated in other ingredients, and  Furikake is often used for them.

”Furikake ふりかけ” refers to a range of dried, normally mixed seasoning sprinkled on top of rice or mixed with it. It contains dried ground fish, seaweed, sesame seeds and spices.  Pre-packaged seasoning mix series are a handy and tasty way to season rice.

One of the largest ranking sites in Japan, Goo Ranking, published ”The best Onigiri ranking” in 2019. It polled 3,397 people about what filling they like in onigiri. The results are as follows: 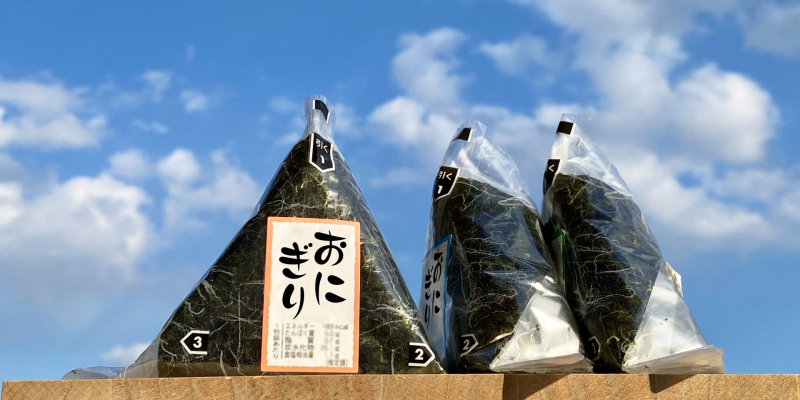 Onigiri is simple, easy, and a lot fun to make. But if you can’t be bothered, just pop in a convenience store and grab one.

Because of its popularity, you can find this treat everywhere in Japan from supermarkets to shops specializing in rice balls.

Especially most Japanese convenience stores stock their onigiri with various fillings and flavours. They keep their onigiri fresh throughout the day, and you can find the texture of nori wrappers amazingly crispy. It is because each onigiri has a special protective packaging designed to keep the seaweed separated away from the sticky rice.

I introduced some must-eat onigiri fillings to you. But as I mentioned above, you can put anything inside your rice balls. The flavour possibilities are endless.

Just prepare rice, salt, and nori, then invent your own fillings for onigiri!

What Is Japanese Dango?

Have you already watched an official music video ”Rain on Me”? It was released in May 2020 by American singers, Lady Gag...

25 Sushi Toppings You Must Try

As mentioned in a posting on Top 10 Things To Do in Japan, “Sushi 寿司” is one of the most famous Japanese dishes around t...

Have you ever eaten octopus? You might've been hesitant in trying the mollusk due to its daunting appearance and unknown...
Fanfiction is Hugely Popular in Japan
Top 10 Things To Do in Japan