Have you ever eaten octopus? You might’ve been hesitant in trying the mollusk due to its daunting appearance and unknown taste. However, you would attest to how delicious the meat is once you try.

The weird-look seafood is consumed in a few parts of the world. South Korea, Spain, Portugal and Japan are the main consumers. They have a variety of octopus cuisines which bring out the distinct taste and texture. The meat has plenty of different nutrients including protein, iron and vitamins that are beneficial for your body.

In this article, I would like to help you get clearer pictures on tako, and 5 popular tako dishes in Japan. 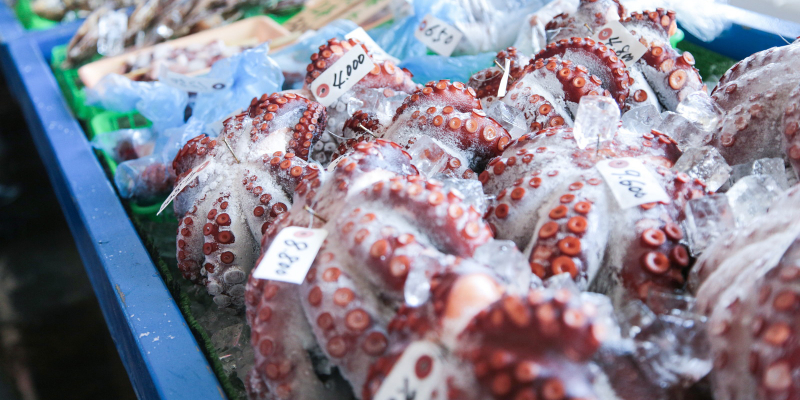 I’ve mentioned in my old postings that Japan has an intimate relationship with marine products. Restaurants in the country serve a wide variety of seafood dishes, typified by sushi. Some of the ingredients are not often consumed in other cultures, and octopus might be one of them.

Japanese people are the No.1 consumer of octopus in the world. The consumption accounts for as much as 60% of the total.

Tako has been a common ingredient for a variety of Japanese dishes and styles of cooking over 2,000 years. It used to be eaten as a preserved food in the ancient and medieval Japan.

How to cook Tako

Unlike what you might think, getting octopus ready for consumption is not difficult in the Japanese style.

When preparing tako, it is washed thoroughly without the guts and frozen to remove the sliminess. After being rubbed with salt, the meat is often pre-boiled to enhance the flavor. Then it is cooked for a variety of dishes.

Although people often think that the meat is tough and chewy, it has a tender texture once boiled properly. 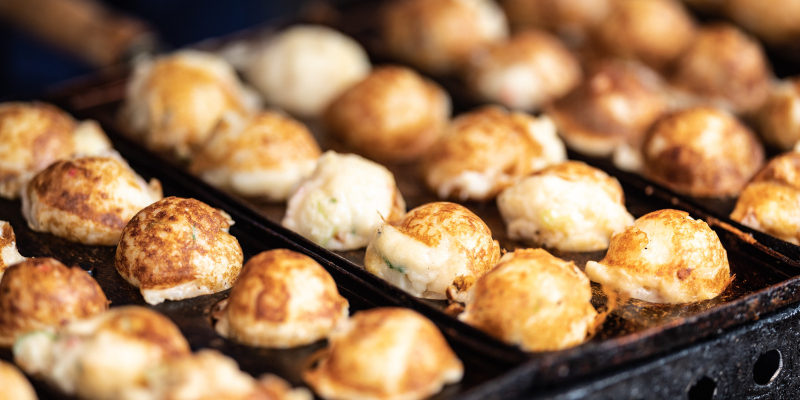 Tako is an essential ingredient for “Takoyaki たこ焼き”, which is one of the most popular octopus dishes in Japan. The dish is a popular street food in Kansai: the south-central region of the main island of Japan.

Takoyaki is a ball-shaped snack made from wheat flour-based batter with special savory takoyaki sauce. The dashi-flavored dough has chopped octopus tentacles and other ingredients including spring onions, pickled ginger, and tempura bits called “Tenkasu 天かす”. Cooked in a special takoyaki pan, the balls get crispy outside, leaving a fluffy texture inside.

When you visit Osaka which is one of the most popular tourist places in the Kansai region, you should try out genuine takoyaki! 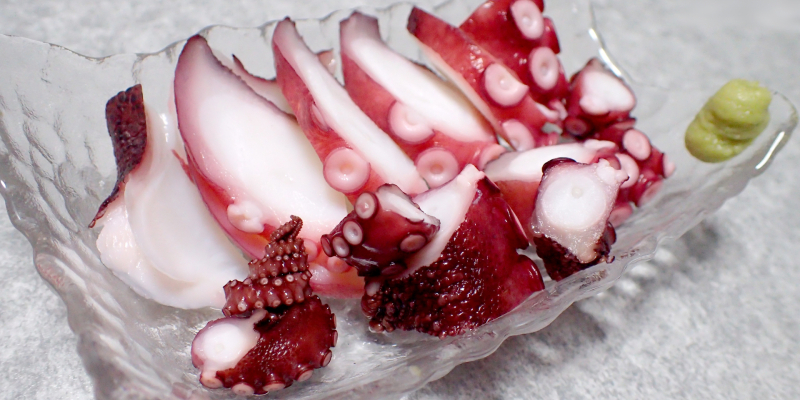 Tako is a popular “Sushi 寿司” topping as well. With an unique appearance: red side skin, white meat, and suction cups, the meat is juicy and tender in texture. It is sliced thinly and often fastened by a belt of Nori (dried seaweed) so the flat meat can be placed on rice.

While tako is normally poached for the dish to soften its chewy texture, some sushi chefs serve the meat raw when it is extremely fresh. The distinct crunchy texture will addict you if you try it once. 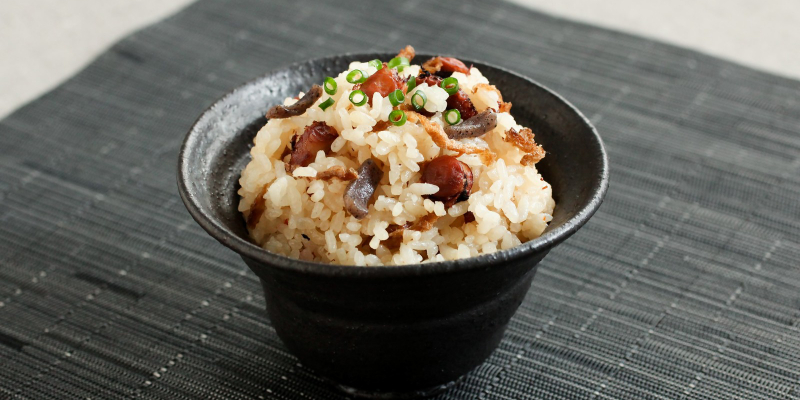 Takomeshi combines tako and rice cooked with other simple ingredients such as ginger, spring onions and shiso leaves. They are chopped and seasoned with Japanese stock (dashi), rice wine and soy sauce. The smell will definitely whets your appetite. 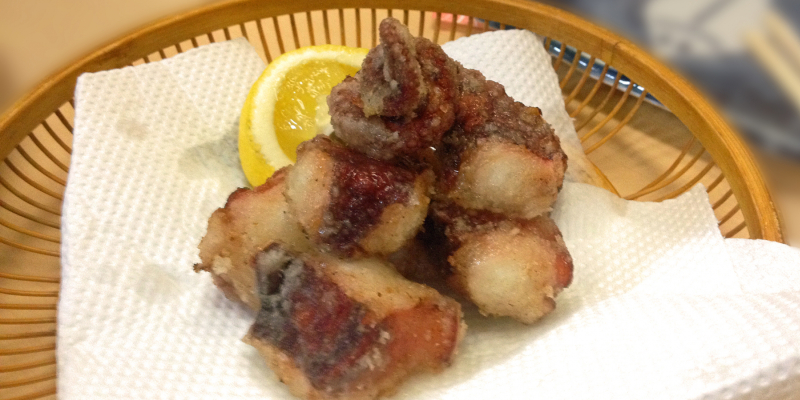 You might think that karaage only refers to deep-fried chicken, however, the word also means a Japanese cooking method in which food is dredged in potato starch or flour then deep-fried in hot oil. In this sense, the ingredients can be anything: fish, seafood, and vegetables.

“Tako no karaage タコのから揚げ” is bite-size octopus coated with flour and deep-fried till golden brown. It is as tender as its chicken counterpart, juicy inside and ultra crispy outside. Tako is often marinated or seasoned before deep-fried, and the seasonings are really up to you. The variations can be soy sauce, sake, garlic and ginger. 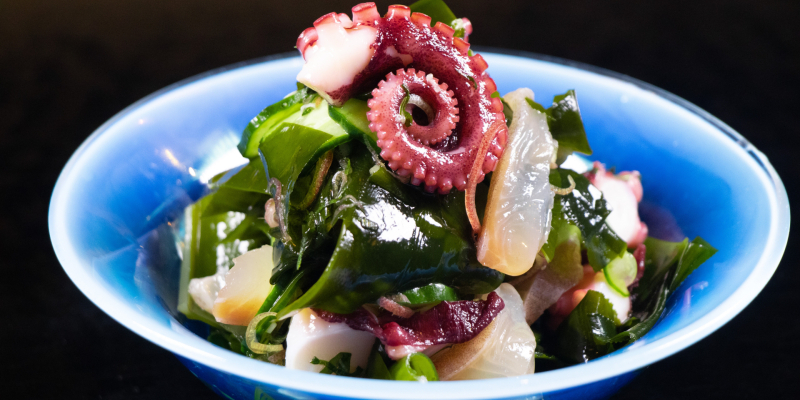 “Tako no sunomo タコの酢の物”, also called “Takosu タコ酢” refers to a range of Japanese dishes made of raw vegetables and octopus marinated in vinegar dressing. It is often considered cucumber salad. Meaning “Su 酢” as vinegar, the sweet and sour salad is simple and easy to prepare in a short time.

To prepare Tako no sunomono, tako is boiled and sliced thinly leaving the crunchy texture, then combined with vegetables in vinegar-based dressing. Cucumbers are often used for the dish, but they can be substituted with any vegetables or seafood. The ingredients of sunomono dressing can’t be simple: vinegar, sugar, salt, and soy sauce. 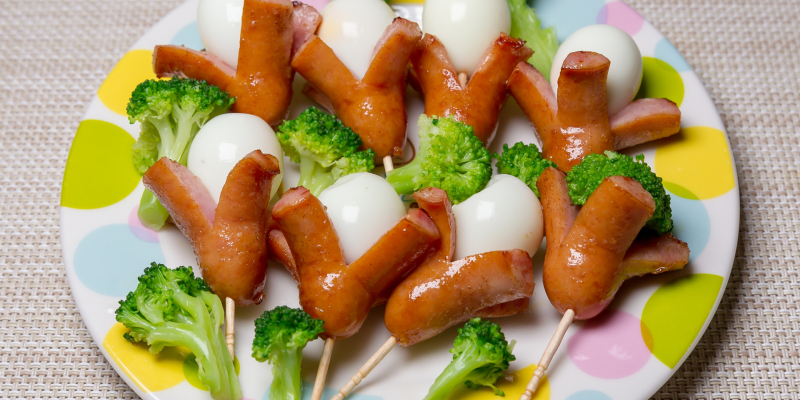 Now I’ll share one more dish which is related to tako. It is “Octopus sausage” called “Takosan sausage タコさんソーセージ”. Exactly speaking, it is pork sausage, not made of octopus. Takosan sausage is a sausage that is cut to resemble an octopus. It is a kids’ favorite food for their lunch boxes. Fun, cute and delicious, who wouldn’t like it?

25 Sushi Toppings You Must Try

As mentioned in a posting on Top 10 Things To Do in Japan, “Sushi 寿司” is one of the most famous Japanese dishes around t...

”Onigiri おにぎり” is a simple yet delicious Japanese staple loved by everyone from children to adults. It is a perfect trea...

In this post, I'm going to share 7 common words often used to characterize Japanese women. However, attention please, I ...

What Is Japanese Dango?

Have you already watched an official music video ”Rain on Me”? It was released in May 2020 by American singers, Lady Gag...
4 Best English Covers of Japanese Songs
The Truth About Japanese Women